The names Waub-Ojeeg, or White Fisher, is to be found in few history books nor is there a monument to this greatest of Ojibwe Chiefs. His story, like that of his Indian contemporaries, can only be pieced together from fragments gathered from various pioneer histories and from the oral legends of the Ojibwe themselves. When these fragments have been carefully sorted and tabulated, the shadowy profile of Waub-Ojeeg emerges as an inspired leader of his people and a fearless warrior.

As the son of Ma-mong-e-se-da, Chief of the Pigeon River or Reindeer Clan of Ojibwe, the young Waub-Ojeeg was faced with the necessity of filling the moccasins of an illustrious father whose feats on the hunt, in the council lodge, and on the warpath lived in legend among the Indians for generations. A staunch friend of the French, Ma-mong-e-se-da led a large force of Lake Superior's Northern Ojibwe to Quebec to aid in the defense of that fort against the British. It is said that the defeated and mortally wounded Montcalm died in the arms of the Chief on the Plains of Abraham.

Waub-Ojeeg was six foot six inches tall and a remarkable man. He was only twenty-two years old when he became recognized as the head chief of his people.

The fact that Waub-Ojeeg was a peerless hunter and trapper is significant only because it helps to explain the great esteem and respect which he enjoyed as chief of his people. Also, the immense areas which he covered in these pursuits made him intimately familiar with much of the terrain over which he would later lead his warriors against the enemy.

A typical incident illustrating his resourcefulness as a hunter and woodsman involved a chance meeting with a belligerent bull moose.

It seems that Waub-Ojeeg was proceeding, unarmed except for a hunting knife, through a stand of large pine timber when the moose, proceeding in an opposite direction, disputed with loud grunts and lowered head, the right of Waub-Ojeeg to pass. Not wishing to argue the point, the Indian stepped behind the nearest tree expecting the moose to proceed on its way.

For some obscure reason known only to the bull, he chose instead to chase Waub-Ojeeg from the protection of one tree to the next with a red-eyed ferocity and determination which left no doubt of his homicidal intent. el, When the moose showed no sign of tiring this grim game of hide and seek, Waub-Ojeeg snatched up a stout stick and, in the brief intervals between the charges of the moose, removed the leather lacing from one of his high winter moccasins and bound his hunting knife to the end of the stick. With this improvised lance and a great deal of care and agility in avoiding the horns and hoofs of the enraged animal, the young hunter was able to inflict wounds which finally became numerous and deep enough to drain the life blood from the moose and bring to a conclusion what must surely have been the first and only bull fight ever staged on the shores of Lake Superior.

Waub-Ojeeg sent out messengers with war sticks and tobacco to the major Ojibwe villages in one of his first large war parties. Although quite young, his name was already a legend with all the Ojibwe. Within a short time canoes from villages such as Grand Portage, Sault St. Marie, Bad River, and the renowned warriors from Leech Lake arrived to answer Waub-Ojeegs call at Madeline Island. 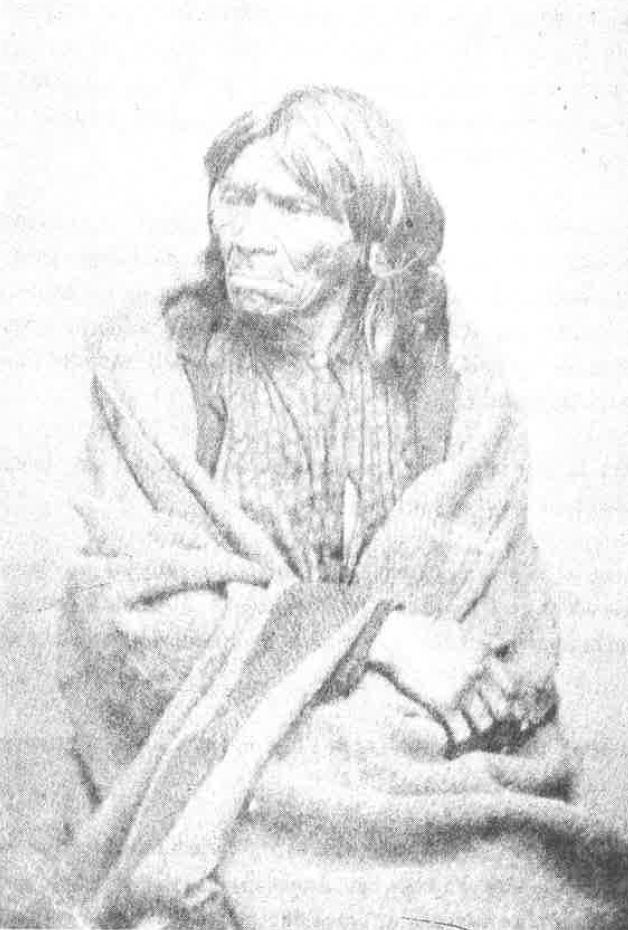 Waub-ojeeg - White Fisher: Early 19th Century Ojibwe leaders from Madeline Island, who led his Lake Superior warriors in a decisive battle against the Sioux and Fox nations at the battle of St. Croix Falls. This victory assured the Ojibwe the area of northern Wisconsin unchallenged.

After leaving Lake Superior, Waub-Ojeegs little army ascended the left branch of the Mush-kee-se-bee or Bad River to its head where a ten mile portage was made into Long Lake on the height of land between Lake Superior and the Mississippi. Three more shorter portages from Lake to Lake brought them to the Num-akaug-un branch of the St. Croix River. Since this was enemy country, Waub-Ojeeg proceeded with great caution and kept scouts constantly ahead to prevent a surprise encounter with the enemy. Arriving at the mouth of the Snake River, where a rendezvous with the promised reinforcements from Mille Lacs and Sandy Lake had been pre-arranged, Waub-Ojeeg was disappointed to find no one in sight.

Still confident in the numbers and fighting ability of his Lake Superior warriors, he proceeded down the St. Croix toward what he firmly believed would be a devastating surprise attack on the Sioux and Fox.

At about that time the three hundred Ojibwe were crossing the height of land between the Lake Superior and Mississippi waterheads, a like number of Fox Indians were proceeding up the Mississippi River to join a Sioux party of one hundred fifty warriors who had agreed to assist them in a last desperate attempt to annihilate the Ojibwe. It was routine that the Sioux and Fox should choose the St. Croix River as a war path to the north. It was incredible coincidence that they should do so at almost exactly the same moment that Waub-Ojeeg's forces moved southward on the same river,

As the Ojibwe prepared to cross 'the narrow and boulder strewn neck of rock which washed the black paint from their faces, which they were required to wear before engaging the enemy on their first war path, treasured amulets or be-ne-si-wi-am, made and guaranteed by the medicine man to keep the wearer safe, were hung about necks or attached to arm bands. Older warriors donned hard earned eagle feathers, each of which denoted an enemy slain. Muskets were loaded, knives and tomahawks were checked for readiness. At a word from Waub-Ojeeg, twenty-five warriors moved silently into the fringe of small trees on the landward side of the portage closing the only avenue of escape save the boiling rapids above and below the falls.

Having landed their dugouts, the Fox and Sioux quickly became aware of the presence of the Ojibwe on the portage. Confident of victory, and wishing to show contempt for the enemy, it was decided that the Fox would engage the Ojibwe alone, while the Sioux would be spectators and smoke their pipes in sneering unconcern on a pinnacle near the Falls. This, they felt, would be a magnificent gesture which would become a legend and a subject for boasting throughout the Fox and Sioux nations forever.

With these preliminary acts of symbolism and pageantry performed and a deafening, opening volley of musketry, and the battle was intensified in the hopelessly crowded confines of the portage. Muskets became clubs for lack of sufficient time and space to reload. Knives and tomahawks rose above the milling, sweating mass of warriors and descended swiftly and surely with the sickening, crunching thud of cleaving flesh and bone. Yells of triumph and screams of pain punctuated the steady, pervasive roar of the falls. Warriors, like grotesque dancers, locked in single combat at the river's edge, toppled into the rapids to be swept relentlessly to their deaths among the jagged rocks below. The dead and dying littered the rugged portage with scalps intact for want of an adversary with the time and courage to claim his trophy. This was a elemental, primitive conflict. This was "kill or be killed" at its grisly worst.

At this exhausting pace, and in what must have been only a few minutes, the tide of battle moved downward toward the foot of the falls, until the Fox, with their backs to the river, appeared to be in immediate danger of annihilation. Seeing this, the Sioux no longer indifferent joined the fray with fresh, screaming enthusiasm. Thus reinforced and encouraged, the Fox warriors threw themselves at the tiring, outnumbered Ojibwe and forced them to retreat to the bloody arena at the head of the Falls.

At this point, two things happened which changed the course of history for the Ojibwe, the Fox, the Sioux and the pioneer states of Wisconsin and Minnesota. Waub-Ojeeg, although grievously wounded and exhausted from the tremendous exertion of battle, regrouped the remnants of his demoralized, bleeding warriors, and with loud cries of encouragement and defiance, led a renewed attack on the advancing Fox and Sioux. It will never be known how long this second phase of the battle lasted, or how many more died' among the blood stained rocks. It is only known that the promised but delayed flotilla of fifteen canoes, bearing sixty warriors from Sandy Lake, arrived in time to reinforce Waub-Ojeeg and drive the Fox and Sioux once more to the foot of the portage where most of them died under the knives and tomahawks of the Ojibwe or in the swirling currents and whirlpools of the river.

Costly as it was to the Ojibwe, this victory permanently removed the Fox Tribe from the Wisconsin-Minnesota wilderness and caused the Sioux to withdraw to the open country to the west and north.

Waub-Ojeeg later moved farther inland into present day Minnesota, where his fame grew. He lived out his days, leaving behind many descendents. At his death he was the principal Ojibwe chief of North America. 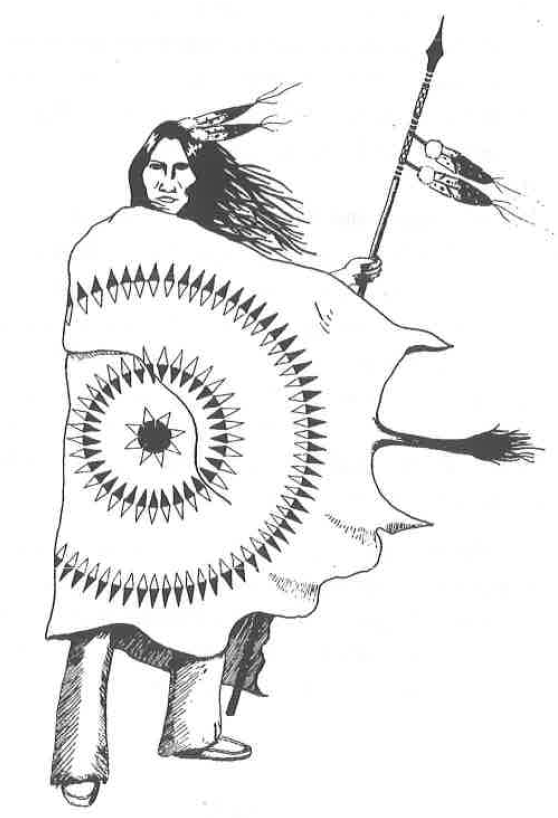