Bug-o-nay-ge-shig, or Hole-in-the-day, as it was interpreted, was born sometime around 1801. His well known older brother "Song-ah-comig", or Firm Ground, was born a few years before.

Hole-in-the-day had moved into Minnesota lands from LaPointe at the time of the Cass expedition in 1820. For the next five years he and his brother served as "Pipe. Bearers" or aides-de-camp to Ba-be-sigundi-bay or Curly Head, principal War Chief for this avant-corps action on the downstream Mississippi. When Curley Head died of a disease controlled at the Prarie du Chien Treaty in 1825, Hole-in-the-day was the more dynamic of the two brothers, becoming the "Front man" while Song-ah-comig worked "behind the scenes". Before passing on, Curly Head had taken no less than 38 Dakotas with him.

In the late 1820's Hole-in-the-day had the rating of Second Chief at Sandy Lake under Ka-ta-wa-be-da; and, in 1828, his son Kwi-wi-sence was born of Ka-ta-wa-be-da's daughter. Shortly, the family moved to Gull Lake for a few years, probably at that time developing the famous "Sugar Bush" on North Long Crow Wing, thence to the mouth of the Little Elk near Little Falls. From that advanced position he variously retreated back to Rabbit Lake or Whitefish under Sioux attacks, though apparently never again going back to Gull Lake.

Bug-o-nay-ge-shig was the most well known chief of his era. Another prominent chief of that time, Buffalo of LaPointe, was equally as important to the bands of the Lake Superior group. Sam Yankee, a noted chief and elder of the Mille Lac Reservation, who lived at East Lake, near Rice Lake recollected many stories from his grandfather, "Manomin-ikesheence," about the bitter feuds between Buffalo, and Bug-o-nay-ge-shig. Mr. Yankee recollected his grandfather as saying that these two great chiefs split, and, as a result, the Lake Superior Bands treaty became completely separate from the Mississippi Band.

"Manomin-ikesheence" was a chief, and signer of the Mississippi Band treaty, and was a close friend and ally of "Bug-o-nay-ge-shig." These Mississippi Band Chiefs thought that Buffalo was too quick to agree to the government agents and was leading the Indians down a bleak trail. Consequently, these two great personalities clashed, making the split. (Sam Yankee, the resource on this subject passed away in May of 1975.)

"Bug-o-nay-ge-shig," in 1847, while traveling back from St. Paul, was killed by mixed bloods near the present site of Little Falls. Thus ended the life of one of the truly great Chippewa chiefs. His son "Kwi-wi-sence" or Hole-in-the-day II carried on his chieftainship for many years and became famous during the Sioux uprising of the 1860s. Hole-in-the-day II had plans of joining the Sioux in driving the white man out of Minnesota. On August 18, 1862, Hole-in-the-day II's warriors burned the mission buildings at Gull Lake to the ground and also killed the Indian agent at nearby Crow Wing, at the Chippewa agency.

However, at Leech Lake, where Hole-in-the-day II never did enjoy his father’s popularity, the Ojibwe people rose up against his plan. While many young warriors were anxious for battle, the older chiefs prevailed. "Bi-zhi-ki" of Leech Lake, along with Big Dog did not like Hole-in-the-day’s arrogant attitude nor his logic in fighting the white man. As stated previously, "Kwi-wi-sence" or Hole-in-the-day II, was not well liked by the other chiefs, ever since his father had died.

Many Ojibwe and a few respected whites and half breeds traveled to the Gull Lake camp where "Kwi-wi-sence" held many white captives from the mission at Gull Lake and the Chippewa Agency at Crow Wing. They were all able to stop the battle plan of the young chief from Gull Lake. Had they not done so, the Ojibwe might have joined the Sioux and the Ojibwe people all might have been talking in Ojibwe today instead of English. 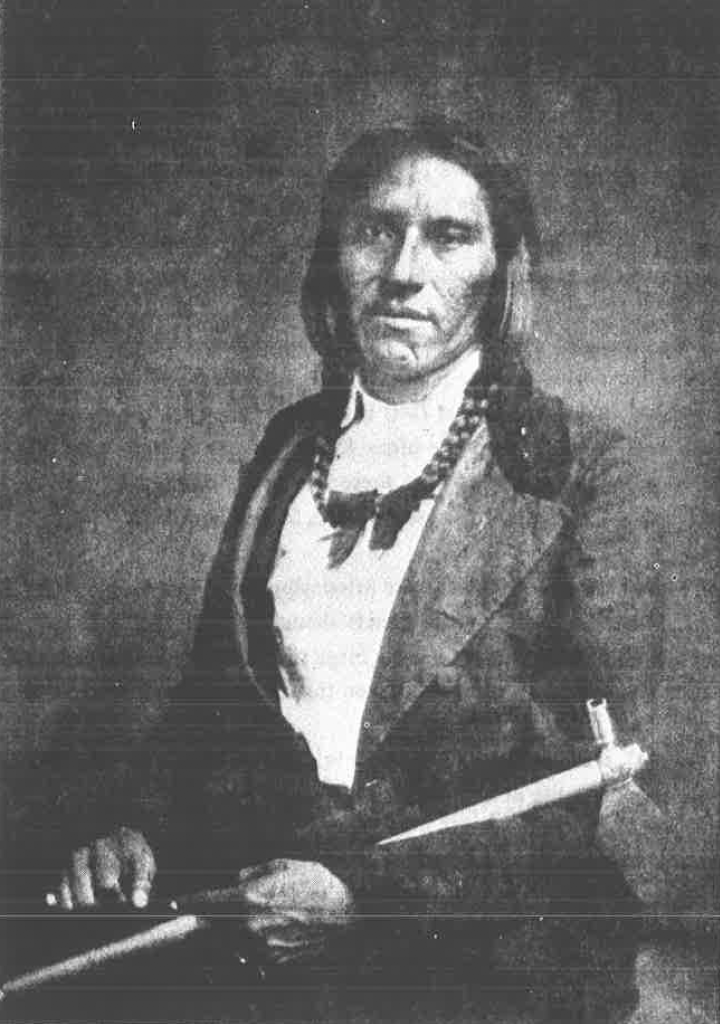 Hole-In-The-Day II or Kwi-wi-sense, played a major part in shaping the history of Minnesota.