Today, on all of our Ojibwe reservations, some of the descendents of our hereditary chiefs reside. Because of the 1934 Indian Reorganization Act, chiefs do not anymore have the type of leadership authority that they had traditionally. However, many of these descendents are still active with the business and affairs of their bands, and some are members of their elected tribal councils. Many of the older generation on our reservations still seek out out hereditary chiefs and go to them for advice in tribal matters. 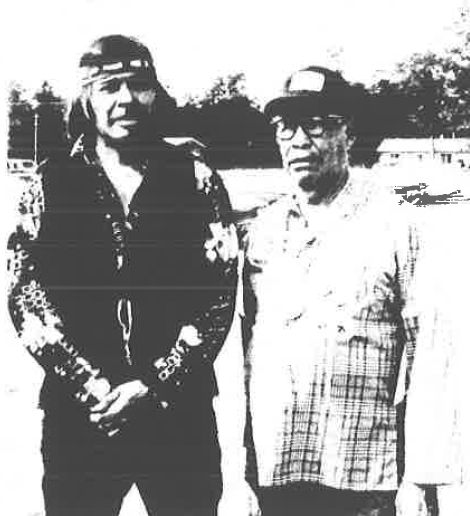 Melvin Eagle is the son of Joe Eagle, now deceased, a traditional chief of the Mississippi Band. Melvin’s grandfather was “Migizi” which means eagle in the Ojibwe language. “Migizi” was one of the principal chiefs who signed the treaty with the Mississippi Band and the United States of America.

John Nayquonabe is the son of Pete Nayquonabe, also of Mille Lacs. John inherited the chieftainship when his father Pete died. John is the grandson of “Nayquonabe” which means the feathers end.

Both Melvin Eagle and John Nayquonabe are involved in the tribal affairs of their band. Both are also owners of ceremonial drums which have been handed down for years to which a great importance is held. John Nayquonabe has also begun officiating at tribal religious ceremonies. These two men are good examples of our present day traditional chiefs.